I wonder if there is a more versatile wine than Rioja, its different styles capable of appealing to an array of wine lovers, from mature leathery elegance to rich, dark-fruited modern styles (the wines not the wine lovers, though I’d like to think I fit the leathery elegance with a smidge of dark-fruited modernity). Rioja is a region which produces quality, fine wine and there is, genuinely, something for everyone and nearly every food. The Riojans long ago married their red wines with the local lamb to delightful effect, so I thought I’d present you with an alternative, but one that I think is just as delicious. Pork is, after all, another Spanish staple, and I’ve combined it here with another Iberian favourite in the form of black pudding. I know a blood sausage is not going to be everyone’s cup of tempranillo, but you could always deploy another kind of stuffing if you are squeamish about the pud, though its aroma and flavour, depth-charged with apple and rosemary, are lovely with the pork. If you do go down another route, try something with a bit of colour will look so much better in the finished, carved slices, perhaps some cooking chorizo or sausagemeat with plenty of green herbs.

This will go with almost any style of Rioja you care to pop the cork on, including white versions, and you can change the sauce to suit too, from a red wine gravy through sherry or Marsala sauce, to a creamy but tangy version made with reduced dry cider, stock and crème fraîche. It’s almost as versatile as Rioja itself!

This is also absolutely delicious cold, particularly if you are a piccalilli lover like me, which seems to work beautifully with the pork, bacon and black pudding. When cold the pork will be much easier to carve into thinner slices if desired.

Though this pork dish is fairly simple to make it looks stylish on the plate, so roll out a fine Rioja to partner it. The Muga Reserva, Rioja 2016 is still youthful, dense, full-bodied and delicious if decanted, while the exotically rich and plump Pujanza Valdepoleo, Rioja 2016 will tackle anything you can throw at it. For a fragrant, silky take on Rioja the Contino Garnacha, Rioja 2018 will be wonderful, but do push the boat out and bag a bottle of CVNE Imperial Gran Reserva, Rioja 2009, all classical elegance but nonetheless richly flavoured. If it is smoky, leathery and delicate maturity without sacrificing delightful freshness you are looking for, look no further than the López de Heredia Viña Tondonia Reserva, Rioja 2008 for its beguilingly subtle charms. White Rioja can work well here too. Try the CVNE Monopole Classico Blanco, Rioja 2017, matured in old sherry barrels and nutty and aromatic, a touch salty almost, but fresh too, or pair the pork with the creamy, stylish Marqués de Murrieta Blanco Capellanía Vineyard, Rioja 2015. To be fair, enjoy this dish with any Rioja wine and you won’t be let down. 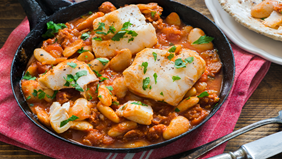