In my role as a wine educator, one of the most important things is to break down the world of wine and its myriad complexities into something more manageable. In many wine appreciation courses, this is achieved through the 5 W's; Who, What, When, Where, and Why along with an H for How. If you can appreciate the role of these pillars you have the foundations that will allow you to explore the world of wine with confidence, and most importantly you will be able to develop an understanding of not just what you like but why you like it.

So, I thought I'd use this approach here to give you a little more information on a selection of wines in the New and Exclusive category of our Summer Edit.

While the order of importance and level of significance for each of the W's is the cause of much debate, for this article we will stick to the journalistic order listed above.

From the Barossa in South Australia, the Pfeiffer family are seeking to make their property as sustainable as possible. Awarded Dark Horse winery of the year by leading Australian wine critic James Halliday in 2016, Whistler are amongst a new wave of Australian producers seeking a more elegant style of wine.

Focusing on traditional varieties, shiraz and grenache, the vineyards were converted to organic practices in 2013 and biodynamic practices in 2017. At 13% alcohol both wines strike the balance between traditional Barossa opulence and the new age search for freshness and energy. Being Australian I may be biased but I think this makes them perfect accompaniments to barbecue-fuelled evenings.

Although not new as such, vidiano, assyrtiko and malvasia are three grape varieties I suspect most members are not overly familiar with.

Vidiano has only been introduced to commercial production over the last decade or two, meaning producers are still learning how to harness its potential with wines offering texture and medium to high alcohol balanced by medium to high acidity. Similarly assyrtiko, widely considered one of the premium grapes of the Mediterranean, balances high alcohol with crisp acidity and when grown in Crete, produces significant primary fruit aromas. Meanwhile malvasia delivers intense fruity character with peaches and apricots prominent.

Here, the three grapes are blended, resulting in a substantial yet delicious wine called Kompsos, which translates to elegant, stylish and smooth. This perfectly sums up this white which delivers concentrated flavour with the softest of touches.

Most wine lovers are aware of the concept of vintage variation which describes how different conditions can result in vastly different wines being produced from the same vines one year to the next. They may also be aware that challenging or difficult vintages are usually a euphemism for poor years. But when used to describe the 2020 harvest in South Africa, the challenges and difficulties were not the weather, but rather the ever-changing restrictions and lockdown conditions that the nation's wine producers encountered (read the article we wrote on this last summer.)

Just as it looked like the entire vintage that promised so much would be lost, a last-minute amendment allowed growers to carry on with the production of wine. As a result we are delighted to return with the second vintage of our Exhibition Chenin Blanc Western Cape. Made by the remarkable yet unassuming Chris Alheit, Chris describes the wine as a close first cousin to his iconic Cartology wine. Sourced from old vines which thrived in the exceptional vintage conditions of 2020, the wine is rich yet delicate with exceptional detail and added complexity from the very gentle use of oak, making it an absolute must try for lovers of chenin blanc.

Catch up with our virtual event with Chris Alheit on YouTube

Technically my selection for Where? is not new. In fact Carineña is one of the oldest recognised wine regions in Spain having been registered as a DO (Denominación de Origen) in 1932 shortly after Rioja, which was the first in 1925. But despite that, this region in Aragon, around 50km south-west of Zaragoza, remains largely unknown in the UK, partly because of the long domination of co-ops here producing fairly non-descript wines.

Although the region is considered the source of the grape variety carineña, known elsewhere as mazuela or carignan, it is not in fact widely planted in the region these days. Instead it is garnacha that dominates, with its ability to adapt to extreme temperature swings important due to the altitude that the vines are grown at here.

Typically the best garnacha/grenache wines are produced from old vines and here 50-year old-vines make a powerful concentrated wine with loads of red-fruit character and relatively light tannins. The acidity is not particularly high but the wine is juicy enough to make it glorious for summertime sipping.

I almost regretted asking Sarah Knowles MW why The Society's Sicilian Organic White was the latest wine to be added to the range of Society's own wines such was the length of her reply!

Alongside the aim of allowing members to explore Italy's many grapes with confidence, there was the fact that this blend of two is particularly delicious: the catarratto adds minerality, a touch of salinity and acid to grillo's fruity fullness. Then there's the fact that the vines happen to be organic so whilst not the primary reason for purchase, it highlights the possibility in Sicily for conscientious growers to be organic without too much effort, the weather here being so good for grapes.

Then most importantly and in Sarah's unique prose: 'It was because the wine was right. The quality was great, the price very fair and at under ten pounds this is the kind of wine I want to drink and so I want members to be able to too!'. If that's not enough to get you to try it then I don't know what it will take.

While most winemakers will tell you that great wines are made in the vineyards not winery, how a wine is made has a big impact on its style and quality. Now more than ever there are a host of different methods available to producers as they mix modern winemaking know-how with traditional practices that have been around for centuries.

One of these traditional methods that has seen a resurgence in recent years is skin-contact white wines, commonly referred to as orange wine (you can read more about that here). To date orange wines are far more likely to have been found in east London wine bars than Wine Society members' homes, and for good reason as many of them are as faulty as they are poor value. They are too often served and supposedly enjoyed on the basis of a natural/low-intervention wine rhetoric that is more hype than reality. But to discard orange wines as a fad is to do a disservice to a technique, that when done well can create remarkably interesting and complex wines.

The Pittnauer Blonde by Nature is made by allowing a blend of grüner veltliner, pinot blanc and chardonnay to ferment in barriques and amphorae in contact with their skins. This produces a wine with slightly grippy tannins, savoury mealiness and some oxidative qualities which fans of sherry or Jura whites might recognise.

Are you brave enough to try? Please do, and let us and your fellow members know what you think by leaving a review on the website. 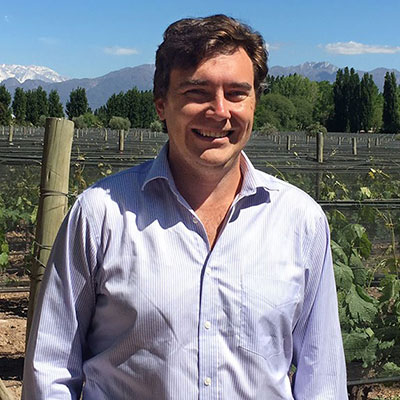 Our Tastings & Events manager since 2017, Tim is tasked with devising and overseeing a broad programme of events for members. Prior to moving to the UK, Tim created and ran the Sydney Wine Centre, and his favourite food and wine pairing remains Australia’s unique Hunter Valley semillon with oysters.