As I write this Sebastian is in his 49th year with The Wine Society. In April he retires leaving an extraordinary legacy, both for The Wine Society and the international wine industry. What I have most admired about Sebastian is his unwavering focus on quality and value whilst always keeping members and The Society in mind. He is a razor-sharp taster with the understanding and humility to appreciate that good wine comes at every price point. Decisive, often strong-minded, Sebastian is an excellent buyer and inspiring role model, and his talent with the written word, communicating so much with such concision, is remarkable.

‘Sebastian taught me to come straight to the point. Most en primeur offers written by other companies start with the weather. His first paragraph talks about the quality and character of the wines and why you should buy them.’ Toby Morrhall

Sebastian’s way with people and his approach are perhaps just as memorable. Always direct, always curious and always open to new ideas, he is supportive of younger winemakers and colleagues alike. Academically brilliant, courteous and charming, with a glint in his eye, Sebastian is down-to-earth and always keen to have fun (he might have tried all the great wines of the world but loves just as much to have a good refreshing pint of beer!). He also played a significant role as a member of The Society’s Executive Team until 2012, working alongside Liz Cerroti who remembers in meetings his ability to be ‘astute and refreshingly succinct, seeing the right answer quickly and always then keen to move on… It wasn’t unusual in a Committee meeting to hear the words ‘I need to decant the wines now’ as he made an early exit!’

Wine Champions (now in its 21st year and our most popular offer of the year) was Sebastian’s invention. So was Wine Without Fuss and The Society’s News (now part of 1874). His ideas and vision have been game-changers for The Society. He has championed wines from unknown regions, was amongst the first to import from Tasmania (under the Exhibition label) years before the rest of the UK trade. He adores discovering what he calls ‘Cinderella regions’, off-the-beaten track wines, another strand of our buying strategy that he instilled.

Tasting and travelling with Sebastian has created memorable moments for all the buying team and many of the trade. I was going to summarise their comments but couldn’t do them justice:

Freddy Bulmer describes his arrival at the boarding gate in a busy London airport: ‘He looked as relaxed as anything: Stress free, no sign of having made any effort to get there and what I particularly liked was that the only luggage he had for our trip was a small bag no bigger than a briefcase. All signs of an extremely well-travelled man.’

My favourite memory of travelling with Sebastian is, unsurprisingly, in Bordeaux, and at Château Rauzan-Ségla. On returning for our overnight stay after a very good dinner elsewhere, we managed to set off the alarm, despite the tutorial we had received, and Seb was helpless with giggles, leaving me to face the fire brigade who thankfully didn’t show up!’
Joanna Locke MW 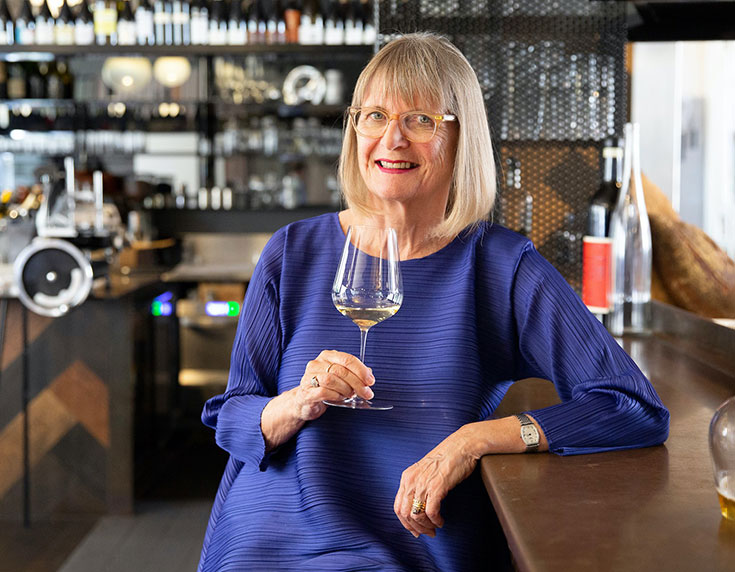 'I love tasting with Sebastian (which I have done as part of the  Southwold group of tasters twice a year for longer than I care to admit, and also at The Wine Society) because, not only does he taste superbly, he is so irreverent. I wonder whether he was quite so, ahem forthright about certain wines and certain wine producers when he was younger? One of my fondest memories is of being told to quieten down by the next table at a restaurant in Florence when dining with Sebastian and David Gleave MW.’
Jancis Robinson MW

‘Wine is about the people, and spending time in Piedmont with Sebastian in 2018 really brought this home to me. Current owners now in their thirties and forties would have been running around the winery as children on his earliest visits to the region and his arrival for so many was like welcoming back an old friend or family member. Building these relationships is what inspires me as a buyer.’
Matthew Horsley

Marcel Orford-Williams remembers: ‘Many hours in a car were spent trying to avoid not being late in pre-satnav days or even pre-mobile days. The ability to focus on the job in hand, to cut to the chase was something I have always admired. Uppermost in Sebastian’s thoughts were always the members.’

‘Every year I travel to Bordeaux in April for the en primeur tastings and I always ask Seb to join me. This is not only because he has an encyclopaedic knowledge of previous vintages, but he also understands the highly complex connections of who owns which châteaux, who married whose daughter and he always ‘knows where the bodies are buried’! But most of all Sebastian is tremendous fun to travel with, whether it’s visiting famous châteaux and bluntly telling the owner what he thinks of the wines – always done with a disarming twinkle in his eye – or sharing a palate-cleansing beer after a long day’s tasting, Sebastian has the youthful enthusiasm of a man one-third his age, and that makes him brilliant company when on the road.’
Tim Sykes

Wine Society Chair, Alan Black, sums up the Committee’s view and appreciation of Sebastian: ‘Independent; speaks his mind; passionate; judgment underpinned by character and depth of knowledge; committed to The Society; Sebastian Payne is a colossus in the wine world and in The Society. He is the epitome of what we want in a buyer – great fun, generates extraordinary enthusiasm and joy and is a wonderful raconteur about wine and every aspect of it. He has always had the total trust of the Committee and we always look forward to his recommendations. We will miss him greatly.’

Sebastian has been an inspiration to so many of us and we all feel privileged to have worked with him. We’ll miss him professionally and personally, but feel sure that the temptation to taste new wines, hear the latest gossip and share good food will mean he will need no excuse to visit us at WS HQ or with members at an event at some point.