Dionysus, son of Zeus and the Greco-Roman God of the grape harvest, winemaking and wine is, according to myth, himself responsible for planting the first vines in Naxos, near Taormina in Sicily. Also known as Bacchus, Dionysus, is said to have sailed to Sicily with a vine growing in a hollow bird bone, he is said to have moved it to a lion’s bone when the roots outgrew the bird’s and to a larger donkey’s bone before arriving in Sicily where he could plant the vine in the earth.

To this day wine is a vibrant and major part of Sicily’s culture and economy, producing 17.5% of Italy’s total wine volume with around 112,000 hectares of vines. Vines have been grown, and wines made in Sicily for hundreds of years, with references in Greek and Roman mythology, Homer’s Odyssey and more recently in Admiral Nelson’s logs. Despite Sicily’s long viticultural history however until the last 20 or 30 years, most of what Sicily was producing was perhaps a little simple or rustic, often bottled on the mainland without an origin statement or used in blends.

However, over the last 20-30 years an increasing number of producers have been focused on making internationally excellent wines at various price points. Old vines are being given new life, and new sites are being planted. Winemakers are exploring everything from low- sulphur wines, how organic viticulture can impact the wine, creative blends, and traditional varieties. The feeling when visiting these suppliers is overwhelmingly positive, filled with energetic conversations about ancient grapes, hair-raising drives to remote vineyard sites and wonderful long dinners enjoying the perfect local seasonal bounty while tasting wine after wine.

There are a large number of grapes grown across the island, many of them indigenous to Italy, if not to Sicily, with clones unique to the island. There are also many vineyards producing French varieties or popular northern Italian varieties. At the cheaper entry-level point of the market Sicilians have great commercial success with these, although we find they are perhaps less interesting to us.

There are six key varieties to my mind – grillo, catarratto and carricante for the whites and nero d’avola, nerello mascalese and frappato for the reds.

Grillo – This white variety is perfectly suited to the heat of a Sicilian summer, although can sunburn easily and so the best is often from bush vines where the foliage shades the grapes. Due to its tendency to oxidise, grillo was popular for the production of Sicily’s high-quality fortified wine – Marsala. However, as the global demand for fortified wines waned, many hectares of grillo vineyards were lost. Luckily, with improvements in modern vinification, winemakers quickly realised they could make characterful, fresh dry white wines that could achieve good quality levels and were much more suited to the global demand for crisp, dry, fruity, white wines. Grillo today is mainly grown in Western Sicily around Marsala and Trapani often in sunny coastal sites. Often, dry white wines made from grillo can have peach, apricot and preserved-lemon flavours, with almond skin secondary flavours developing and a fresh dry style that pairs beautifully with fresh seafood, grilled vegetables or creamy risottos.

Catarratto – This is Sicily’s most widely planted grape and can be found across the island accounting for nearly 35% of the land devoted to vines. Catarratto was another important component in the production of Marsala, with high yields making it very popular. It was only with the changing priorities in Sicilian winemaking in the 1990s that winemakers really began to understand and appreciate the potential of dry styles of wine made from regional catarratto. A little like chardonnay in many ways, when the yields are well managed, catarratto can show a real sense of place, with a medium body, apple, ripe citrus, sage and butter notes.

Carricante – is grown almost exclusively on the highest volcanic slopes of Etna’s craggy mountain. Although it accounts for less than 1% of the plantings in Sicily, it is perhaps the variety with the highest quality potential. Having been more extensively planted in the past it was unpopular for its low alcohol and high acid grapes, qualities today that by contrast are highly sort after. Often compared with riesling, great carricante has a linear style and often mineral and tart, citrus flavours.

Nero d’Avola – Sicily’s most widely planted red variety takes it name from the town of Avola near Ragusa in south-eastern Sicily where it is attributed as coming from. Nero d’avola likes the heat and is often trained near to the ground to soak up the warmth so that it ripens fully early with harvest often in mid-September. It can also thrive in damp, saline-rich soils, where other varieties struggle, still retaining its acidity and primary fruit charm. Generally, these wines are medium to full-bodied with intense red and black berry fruit flavours. Nero d’avola from higher altitude, central Sicilian sites can be more structured with more herbal or mineral nuances.

Frappato – One of Sicily’s oldest indigenous grapes, frappato is most commonly found around Vittoria and Ragusa in south-eastern Sicily although also has plantings around Trapani in western Sicily. A charming grape gaining more international attention, it creates red wines with very light colours, tart red-berry flavours, bright acidity and low levels of tannin. Perfect for chilling and summer drinking especially paired with grilled seafood or antipasti. Frappato is sometimes better known as a component of Sicily’s only DOCG – (Denominazione di Origine Controllata e Garantita, Italy’s highest classification for quality), Cerasuolo di Vittoria where it is blended with nero d’Avola creating a brilliantly balanced and characterful red.

Nerello mascalese – Over the last 20 years this is the variety from Sicily that has gained most international attention. Grown on the slopes of Mount Etna, the true ethereal, complex and perfumed nature of this grape, from this volcanic region, has started to be talked about in hushed tones. Old vineyards are sought after, and new vineyards are being established as the fine wine world puts its money where its mouth is, convinced that nerello mascalese has the potential to play at the very top level. The wines have cranberry and tart-cherry fruit, floral violet and herbal black-tea notes with savoury spice, dried leaves and leather developing with age; think pinot noir crossed with Nebbiolo; elegance and poise over richness and weight.

Other indigenous grapes of interest:

Although there are exceptions (most notably Tasca d’Almerita’s Tenuta Regaleali) the majority of Sicily’s vineyards are within a few miles of the coast and often on slightly elevated sites where the winds can moderate the temperatures at night. Again, there are great exceptions, but generally speaking western Sicily’s vineyards focused around Trapani, Marsala and Menfi are known for their white wines made from grillo and catarratto. The reds come into their own in the southeast of Sicily around Vittoria, Ragusa and Avola from where nero d’avola takes its name and frappato forms a key part of Sicily’s only DOCG, Cerasuolo di Vittoria. Increasingly, there is investment in and interest for the wines from Etna’s volcanic slopes made from carricante and nerello mascalese in the east of the island near the town of Catania.

Producers to look out for: 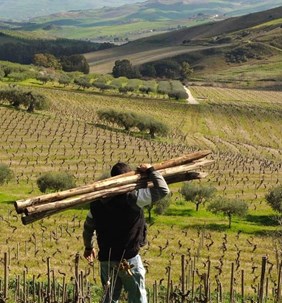 Expertise Sicily: An island with a rich heritage and bright wine future 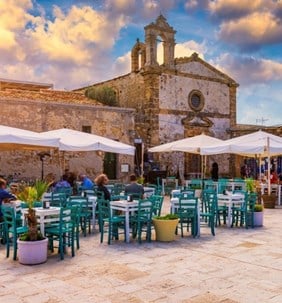 Food & wine The joy of eating in Italy, Spain & Portugal 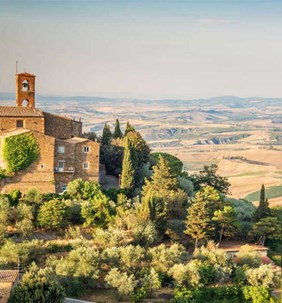 Lifestyle & opinion Andrew Jefford: An elegy to an Italian autumn
Back to top