All Gaul is divided into three parts, wrote Julius Caesar, and the same could be said of the Rhône, the broad, calm river that stretches from the Mediterranean to Lyon, then on into Switzerland. The calm is illusory, the result of dams: this is a river as powerful and bellicose as the Roman soldiers it once transported north to conquer Gaul.

'We owe France's vineyards to the Rhône – all of them'

There were no roads to speak of when Caesar led his troops upriver, and no wine, unless you count the many amphorae those thirsty soldiers brought with them. We owe France's vineyards to the Rhône – all of them, even those that are a long way from the river itself. Once the fighting was done, those soldiers settled and planted vines. The Pax Romana gave vine-growers the opportunity to plant on the fertile soil near the river, safe in the knowledge that no enemies would come sailing down it, and by the 1st century AD, there were wines in the northern Rhône, around the town of Tegna (now Tain l'Hermitage), that merited approving mention by Pliny and Martial.

Today, the river's function as a transport route has been ceded to trains, trucks and airplanes, but it is still the source of the vines' nourishment, to say nothing of the joy it offers the travelling wine-lover. And the three parts that reflect the divisions of ancient Gaul are clearly delineated: the south, where the red grapes are mourvèdre and grenache noir, syrah and cinsault, the whites are marsanne, clairette, bourboulenc, grenache blanc and picpoul (among others) and the wines are mostly blends; the north, with its elegant, restrained syrahs and perfumed viogniers; and the bit in the middle, where they make nougat.

'Here, there is so much land friendly to vines that it's a wonder the Romans ever bothered planting farther north,'

If you start in the south, as the Romans did, you turn your back on the Mediterranean and travel past Avignon with its imposing Popes' Palace and its bridge stopped, like an unfinished sentence, mid-river, past plains and hills where olive trees compete with vines and every other hill seems to be topped with a village in golden stone or a crumbling medieval castle, and eventually the banks begin to rise, until they become the steep, sunbaked slopes of the northern Rhône. Here, syrah vines scrabble for purchase in thin topsoils covering granite, and the Mistral whistles harmlessly above as it follows the river back towards the south where, untrammelled by that granite funnel, it is free to curl around the vines and the winemakers, cooling the former and driving the latter mad. In the south, you will drink fruity whites or rose-petal pinks or the deep, rich reds that are the region's best-known wines – or were, at least, until pale rosé became all the rage. Here, there is so much land friendly to vines that it's a wonder the Romans ever bothered planting farther north, but Châteauneuf-du-Pape is surely the best known, with Gigondas and Vaqueyras behind, and the newer appellations of Beaumes-de-Venise, Rasteau, Vinsobres and Cairanne serving as testimony, should any be needed, that this is a vibrant region that, despite its long history, continues to evolve.

We have now reached the far edge of Provence – but here, the Rhône proffers another rosé, one unfairly neglected in the current fashion for pink pallor. Tavel, just across the river from Châteauneuf-du-Pape, is a tiny village that is also a rosé-only appellation. Its raspberry-rich pink wines were once famous, drunk by King Louis XIV, their shining colour and extravagant flavour, blossoming in the Midi's generous heat, well befitting a monarch known as the Sun King. A while back, I visited Domaine Maby in Tavel; Richard Maby, who makes superb Tavel rosé as well as rounded reds and whites in Lirac and the surrounding area that is part of the general Côtes-du-Rhône appellation, showed me the large, pale stones strewn thickly about their vineyards: galets roulés, absorbing the midday heat and then warming the plants' roots at night, like hot water bottles for vines. In Châteauneuf-du-Pape these stones are famous; but here they are, in Lirac and Tavel, quietly doing the same job for grapes that cost far less, in the bottle, than the southern Rhône's greatest names.

One of those great names is Château de Beaucastel, a top Châteauneuf-du-Pape made by the Perrin family. But the hauteur of Bordeaux or Burgundy has little place in the Rhône. The Perrins also make less renowned but still excellent (and much cheaper) wine in Gigondas, Vaqueyras and at the mansion known as Le Grand Prébois, on the Route de Jonquières below Orange. Miraval, the rosé brand, is a joint venture between them and a certain duo so well-known they go by their first names, although they are no longer Brangelina. Even Hollywood is drawn to the Rhône…

Beyond Orange, with its open-air theatre planted here by the Romans at much the same time that they were constructing their first vineyards (and still in use every summer for the Chorégies d'Orange opera festival), there's the most northernmost appellation of the southern Rhône, Grignan-les-Adhémar. We are already beyond the region where mourvèdre will ripen, so these are lighter, fruitier reds, from grenache and cinsault plus a little syrah for backbone. Then comes the vineless space around Montélimar… and we are into the northern Rhône.

We are running out of time: it's a very long river. We won't reach the twin 'roasted slopes', the Côte-Rôtie, one Blonde and one Brune, just below Lyon, so let's stop at Tain l'Hermitage, Pliny's Tegna, with the legendary granite hill of Hermitage above it. Let's walk up, away from the river but always in sight of it, towards a small chapel now owned by Paul Jaboulet Aîné, although their La Chapelle wine is actually a blend of the hill's vineyards; other great proprietors on this hill include Chave and Chapoutier. The wines (mostly syrah, plus some lovely whites from marsanne and roussanne) are all different, because this hill is divided into rather more than three parts – the topsoils change from sandy gravel to limestone to loess to clay. 'Every patch of soil gives a different flavour,' says the great Hermitage winemaker Jean-Louis Chave. 'The final blend changes from one year to the next, because some soils offer finesse and elegance, while others contribute power and force. It is always a question of adapting…'

Caesar's men, using the power that weapons and a talented leader give, will have forced the Gaullish tribes to adapt – and then, stranded on this foreign soil that was their prize and their pension, were obliged to adapt themselves. From the top of Hermitage, as from the hill topped by the old castle of Châteauneuf-du-Pape, you can watch the river flowing south, towards Italy. You could follow it back there, if you thought there was anything for you at the other end. But Caesar's men stayed, and we express our gratitude to their hardiness and resilience, the vines they brought and the traditions that began with them, every time we pour a Rhône wine. 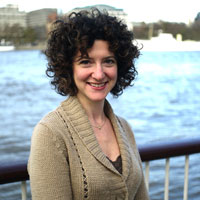 Nina Caplan is an arts, food, drink and travel writer with a regular column in the New Statesman. Her father Harold Caplan was a great champion of The Wine Society and served on the committee of management for 11 years. She is the Louis Roederer International Food & Drink Writer of the Year 2016.

The road less travelled All about Madiran

The road less travelled Hedgerow gin and the history of foraging