What does it mean if you see ‘old vines’, ‘vieilles vignes’, or ‘viñas viejas’ on a wine label? Is it just marketing ‘puff’ or is there any scientific substance behind the oft-claimed belief that ‘old is good’ when it comes to vine age and wine quality?

First of all, it is worth trying to establish what an old vine is. This is not so simple as there is no legal definition and perceptions of 'old' in vineyard terms vary all over the world.

In much of Europe, Phylloxera put paid to any notion of truly venerable vines. This tiny yellow aphid-like insect destroys Vitis vinifera grapevines (all the noble varieties that are used to make wine) by killing their roots. It utterly devastated Europe's wine industry in the 19th century, and also spread to many southern hemisphere countries like Australia (it was first recorded in Geelong, Victoria as early as 1877).

There is no cure for an infestation, which typically kills vines within about five years due to direct root damage, along with secondary microbial infections. The insect is native to eastern North America where local American vine species have evolved some tolerance to Phylloxera attack.

Grafting onto rootstocks the only solution

The only solution to keeping the wine industry alive was to graft cuttings of Vitis vinifera into rootstocks based on these American species. Because the insect is now endemic to most wine-growing regions, almost all commercial grapevines are grafted onto rootstocks, and today there is quite an array of crosses between various American species (and a few other wild vine species too) available from vine nurseries.

The pros and cons of grafting

Nowadays, these are bred to give some other benefit as well as Phylloxera resistance, such as lime tolerance, ability to cope with drought or salinity, or nematode resistance. The problem with grafting is that the graft union seems to weaken the vine and the commercially viable lifespan is limited to around 25 to 30 years.

As a result 'old', 'vieille' or various equivalents are widely used in Europe for vines reaching around 25 years old. With care and commitment vines can be nursed on into their twilight years of their half-century and older, and indeed the oldest vine still producing wine is in Maribor in Slovenia and is believed to be 400 years old.

There are a few, generally isolated, exceptions where the dreaded insect hasn't succeeded in infesting vineyards and where properly ancient vines can still be found. Chile is perhaps most famous, protected by the Andes on one side and chilly Pacific Ocean on the other.

Significant parts of Australia remain Phylloxera free, partly due to geographic isolation (Tasmania and Western Australia) and elsewhere due to stringent quarantine measures in areas like South Australia.

In Europe, Cyprus has escaped the scourge of Phylloxera - possibly due to a combination of isolation, very limestone-rich soils and altitude (vineyards here go up to 1,500 metres) and there are parts of the Mosel Valley where Phylloxera seems unable to survive on the steep slopes and slate soils, so producers like Egon Müller and Dr Hermann have ungrafted vines dating back more than a century.

The louse doesn't seem able to get a foothold in sandy soils either, so there are outcrops like Colares in Portugal and Amyndeon in Greece that are Phylloxera-free and ungrafted vines can be found nearing the century mark. And Greece's island of Santorini is renowned for ancient assyrtiko grown in its very harsh sandy soils.

Australia's Barossa Valley is home to some of the world's oldest vines
Perhaps the world's highest concentration of venerable vines can be found in Barossa in South Australia where an 'Old Vine Charter' and register was established in 2009 to try and preserve the legacy of these old vines, the most ancient of which date back to 1843.

The categories are Old vines (35+years), Survivor vines (70+years), Centenarian vines (100+years) and Ancestor vines (125+years). Obviously there's historical interest in preserving old vineyards (and South Australia is one of the very few places where gouais blanc, one parent of chardonnay and many other famous grape varieties has survived).

However, there is more to it than simply nostalgia. Old vines seem to give more concentration, complexity, and particularly, more depth of mid-palate fruit compared to young vines. These typically show vibrant aromas and bright fruitiness, but sometimes rather hollow flavours.

While proving this scientifically is almost impossible, the weight of anecdotal evidence is that more established vines give something to wine that young vines don't. It's certainly possible to make impressive wine with young vines, and there's a known 'virgin vintage' effect where the first crop from young vines is fantastic (the famous Stag's Leap 1973 that won the Judgement of Paris in 1976 was made from three-year-old vines). Sadly, follow-on vintages are rarely so spectacular until the vine gets to at least a decade old.

Many top Bordeaux châteaux wouldn't dream of including fruit from young vines in their Grand Vin, believing that such fruit simply does not have the concentration or ageability to merit a place in their top blends.

The effect on yield of vine age

Economic factors come into play too - yield tends to drop as vines get older so a vineyard needs to be replaced once crop levels drop below a viable level (typically 25 to 40 years old), unless there's another good reason to keep these vines going, such as quality of fruit.

Rosa Kruger is a self-taught South African viticulturalist (and consultant to Solms Delta) with a passion for old vines. She seeks out plots of ancient vines for her clients to help preserve this legacy. She believes that the benefit of old vines is all about vine structure: the bigger woody mass of the trunk and branches gives the vine reserves.

Crop levels tend to be naturally balanced without any need for manipulations like green harvesting or canopy trimming (young vines tend to need a lot more work in the vineyard to mange vigour and crop load); and older vines have deep roots which can cope better with dry conditions. It takes at least seven years for a vine to develop a full root structure and in time roots may go down as far as six metres into the subsoil, reaching deep reserves of soil moisture.

Old vines also seem to have tougher, more disease-resistant leaves - possibly because a less lush canopy means better sun exposure per leaf. There is also probably a self-selection factor as elderly vines are the ones that survived the ravages of all the diseases vines suffer from - black goo, stem-pitting, Esca, Eutypa die-back, leafroll, fan leaf, canker, crown gall and many others. 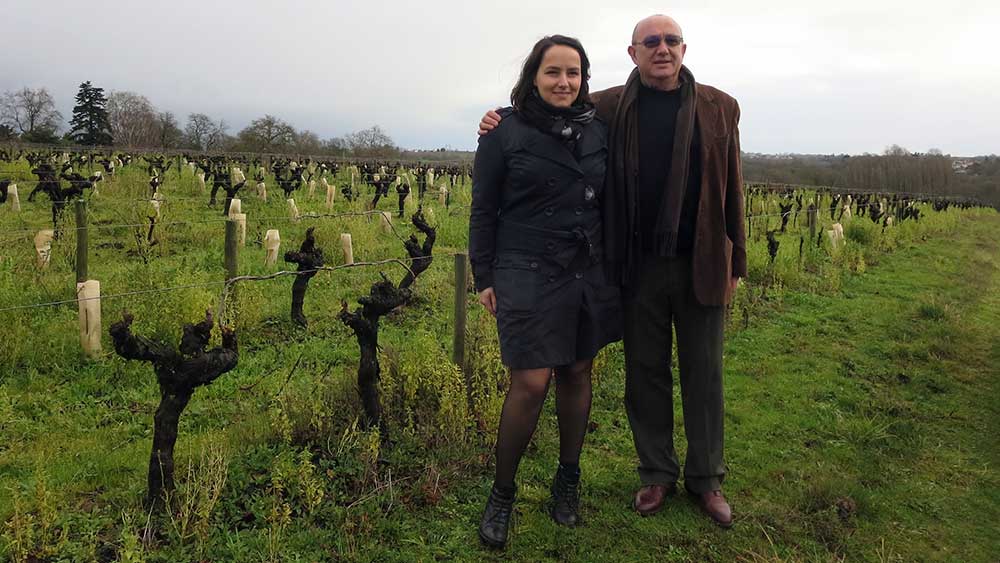 Chéreau Carré, longtime suppliers of The Society's Muscadet Sèvre-et-Maine Sur Lie, also produce Muscadet that ages well in bottle, this is especially the case with their Cuvée de Ceps Centenaires, a wine made from 100+-year-old vines. Here's what they had to say about their precious plot of centenarians.

'The advantage of having very old vines is that they concentrate the aromas because the vine produces fewer grapes and focuses all its energy just on these. Usually, wine growers don't keep old vines because they do not produce enough and they need you to take more care of them as they are very fragile. For example, we can only harvest by hand. We decided to maintain are very old vines and make a special cuvée with them: Comte Leloup du Château de Chasseloir - Cuvée de Ceps Centenaires.

Of course, as very old specimens, some of our vines die and we do not replace them because we don't want to 'dilute' the character of the very old vines with very young vines. To maintain the vineyard we use an ancient technique called marcottage or layering; we take a branch from one vine and plant it into the soil to make a new vine.'

Of course there is a counter argument. Older vines may not have been well-planted or grown with quality in mind. Frequently, yield was the aim in the 1950s to 1980s in many countries, so plantings tended to be high-yielding vine selections on vigorous rootstocks and in widely spaced rows.

Much of Eastern Europe suffered from this until regime change at the beginning of the 1990s but it has also been a factor in Spain, Italy and southern France in the not-too-distant past. Today these vineyards are ageing and yields may become very uneven as vines die off (and within a vineyard, overall yield may be moderate but individual vines may still produce heavy crops of poor quality fruit). In addition, the build-up of virus can affect fruit quality (eg leafroll virus is notorious for delaying ripening in red varieties giving green, bitter flavours).

A claim of 'Old Vines' may be indeed be a little bit of marketing puff, but because these venerable, gnarly beasts are not easy, nor generous with their yields, they tend to attract a certain kind of producer who is committed to quality above all - definitely a useful signpost to wines worth trying.

The road less travelled All about Madiran